GFF was only a ten-year-old mission when Auschwitz was uncovered.  The horrid place was a complex of over 40 concentration and extermination camps operated by Nazi Germany in occupied Poland during World War II and the Holocaust.  Of the 1.3 million people sent to Auschwitz, 1.1 million died, 865,000 upon arrival.  Those not gassed upon arrival died of starvation, exhaustion, disease, executions, or beatings. More than 90% were Jews.  After the New Year in the cold winter of 1945, the Nazi guards at Auschwitz sensed their impending discovery and could stay no longer due to the approaching Russian troops.  So on January 17, they began to lead “death marches,” which included some 15,000 inmates, toward new camps in areas where they still had firm strongholds. 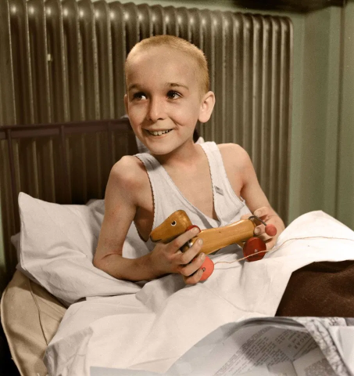 “We knew nothing,” stated the small band of Russian soldiers who had stumbled upon the Auschwitz camps on January 27.  They were not marching to emancipate those imprisoned from their misery and certain death—they did not even know they were there!  They just happened upon the place and discovered some 9,000 sick and starving souls abandoned in a locked hall.  Upon discovery, the emaciated residents fell to their knees and hugged the legs of the men who had come.  They had survived in a place where so many others did not!

In Ezekiel 33:11, the Lord implores Israel to be saved from certain destruction!  He said: “Turn ye, turn ye from your evil ways; for why will ye die, O house of Israel?”  The Lord God desires full and free liberation to any soul who will but come to him in repentant faith and accept Christ as his Savior.  This gift of salvation, though offered freely to all who believe, was purchased with the grueling and despised death of the Son of God upon the Roman cross—an object of great cruelty designed by a merciless regime.  But on the third day, Christ arose conquering death, destruction, and damnation in order to offer to us life, restoration, and heaven!

Romans 10:15 declares: “How beautiful are the feet of them that preach the gospel of peace, and bring glad tidings of good things!”  Those Russian soldiers brought peace to a great number of surviving prisoners.  Our missionaries have the opportunity to bring the Gospel of peace to so many more!

Please lift up your weary missionaries in prayer!  They just might unknowingly be on the verge of stumbling upon a ‘spiritual Auschwitz’ if they are but faithful to proclaim that message a little longer and further in.

Making Christ Known to the Unknown,

February, 2020 GFF was only a ten-year-old mission when Auschwitz was uncovered.  The horrid place was a complex of over 40 concentration and extermination camps operated by Nazi Germany in occupied Poland during World War II and the Holocaust.  Of the 1.3 million people sent to Auschwitz, 1.1 million died, 865,000 upon arrival.  Those not […]