In February/March 1863, British Explorers, Richard Burton & John Speke, were encamped somewhere south of the second largest freshwater lake in the world—Lake Victoria—in Tanzania Africa.  They were in search for the source of the Nile River.  The African Nile runs south to north, contrary to most every other river, for a distance of over 4,100 miles making it the longest in the world by distance.  It cuts deep into the heart of Africa touching 11 countries with two tributaries before reaching the Mediterranean Sea in Cairo Egypt.

Burton & Speke relied heavily on information they learned from locals as they traversed across the East Africa landscape in search for the Nile’s source.  While encamped in the northern jungles, Speke secretly learned of the majestic waters of Lake Victoria to their north and concluded that it 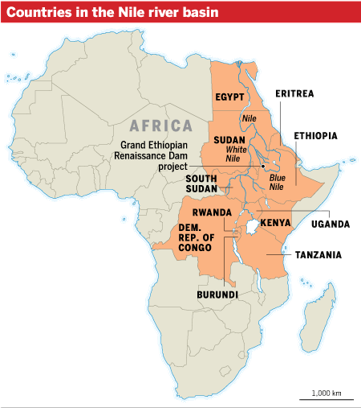 must be the source for which they were looking.  Under cover of night, he organized porters and broke away from his partner hurrying to be the ‘first’ to lay his eyes on the Great Lake, which he did.  After doing so, he rushed back to the coast and returned to England with the claim that he alone had finally uncovered the Nile River’s primary source.

What neither Burton nor Speke could have known, nor anyone of their day, is that, though the mighty river did indeed run north out of Lake Victoria, there are actually two hidden sources which feed Lake Victoria and the Nile River located nearly 250 miles farther west.  These are the mighty glaciers atop the Rwenzori Mountains in the Congo as well as the mountains’ mysterious underground springs!  It is only through satellite imaging in recent years that this was even able to be discovered.  Yet, a quick internet search will still turn up many results which claim that Speke discovered the source, and, that Lake Victoria is that source.

In comparison, many people falsely believe that the missionary himself is the key for the Gospel to reach deep into ‘uncharted’ lands and unreached peoples.  It is true, like Lake Victoria, the missionary indeed has an integral link to the source through which the Gospel is furthered.  However, he has two mighty and mysterious ‘secret’ sources from which he must receive ‘far reaching power.’  The one is the power of the Holy Spirit Himself who is that spiritual life which both abides and guides unlike any other. He is not only at work guiding the missionary but is at work throughout the whole earth bringing knowledge of God and reproof for sin in the most remote of regions where ne’er a missionary has ever reached. (Ps. 19:1-4, Jn 16:8)

Nonetheless, there remains yet another needful source…and that is the secret yet substantive prayers of the saints of God on behalf of both the missionary personally as well as the work in which he labors night and day.  May we never forget that God has ordained the Gospel to go at the behest of beseeching Christians burdened for the lost even if they cannot attend to ‘going further’ themselves! (Lk.10:2, 2 Ths. 3:1) Thank you for praying!

A Bid to Abide in Prayer There are three things I believe are most pressing for you to be assured of concerning the GFF missionaries that you support.  First, they are all safely continuing in the countries where they serve—none feel threatened physically due to the present conditions of the Chinese Covid-19 virus or the […]