As Fools Rushing In

Mrs. O’Leary’s cow kicked over a lantern in her barn on DeKoven Street in Chicago on October 8, 1871. Not only did her family lose her barn to the flames, but more than 300 people were killed and 90,000 were left homeless as “The Great Chicago Fire” leveled 3.5 square miles destroying 17,450 buildings in a three-day inferno. Financial losses totaled over $200 million.

As the fire burned wildly out of control jumping the south branch of the river and then back over the main branch on its path of destruction, there were two groups of people with the same objective but with two very different responses.  The first group was the larger.  It was the hundreds of people rushing from the fire.  They were wise. The second group was the smaller.  It was the dozens of firemen and policemen rushing to the fire to put it out and pull others to safety.  Lives were lost both in the rushing from and the rushing to.

Since the English poet, Alexander Pope, wrote An Essay on Criticism in 1709, the phrase “Where fools rush in…” has become a cultural reference to 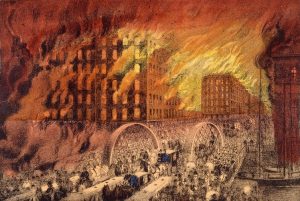 simpletons who do not think before plunging headlong into danger. Speaking of himself within the context of the missionary life, the Apostle Paul says in 1 Corinthians 4:10: “We are fools for Christ’s sake, but ye are wise in Christ; we are weak, but ye are strong; ye are honourable, but we are despised.”

Like that second smaller group which rushed toward the Great Chicago Fire, missionaries are ones who rush in as fools toward those perishing in the raging flames of the uttermost.  Not that we are unaware of the impending doom, but because we are aware of it and yet have not counted our own lives dear unto ourselves.  Someone perishing there can be plucked out to safety…and it is because of that awareness that we rush in.  In a very real sense, it makes us ‘fools’ in that we are certainly guaranteed to rush into the flames of danger where wiser ones will not tread.  Pray for your missionary who has counted himself—and his family— ‘a fool’ having rushed toward danger and not away.

Closed Doors During a recent trip to North Carolina, I was searching for a church to attend on a Sunday evening.       Being unfamiliar with the area, I opened my GPS and searched for “Independent Baptist Churches near me.” My smart phone exploded with names and locations of dozens of possibilities! Having an affinity to […]