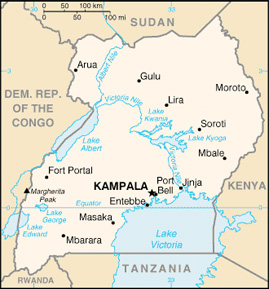 Predominant Religion: Religious freedom for worship and witness. Roman Catholic and the Anglican Church of Uganda make up about 78% of the religious affiliation. Muslims would be about 12% with the remaining 10% being divided between Pentecostal, Seventh Day Adventist, and other religions

Politics – Uganda became a sovereign nation on October 9, 1962. Since that time most of the elected presidents have been deposed by either a war or a coup. The most famous of these was Idi Amin who was a ruthless dictator from 1971-79. Yoweri Musevini is the current president, having originally been elected in 1986, and every five years since then, most recently in 2011.

Economy – Uganda has many natural resources, and is thought to have the potential of feeding all of Africa should it be properly farmed. Despite all the economic potential, political instability and poor economic management has left the country largely impoverished and undeveloped.

Religion – The Constitution of Uganda guarantees freedom of religion, but requires religious groups to register with the government. The Catholic Church, the (Anglican) Church of Uganda, the Orthodox Church, and the Uganda Muslim Supreme Council are registered under the Trustees Incorporation Act. Other groups register as Non-Government Organizations (NGO’s) for an annual fee equivalent to about $2,000.

In 2010, God called Sam and Nicole Moss to be GFF’s first missionaries to Uganda. They are planning to arrive on the field full time in the early months of 2013 to work among the Lugbara people in the Arua district of Northwestern Uganda. They will be teaching national pastors and their families in a Bible Institute, and training them in practical ministry as they plant churches in the surrounding areas.

Besides the Lugbara, there is a great need among the Madi people of the neighboring Adjumani and Moyo districts who still need to have the Bible translated into their language.

G.F.F. HAS FOUR PURPOSES FOR THE WORK IN UGANDA
1. Evangelism
2. Discipleship
3. Establishing of Churches
4. Education

GFF is looking for men and women who are called of God to serve on the mission field. GFF has competent, experienced leadership and is willing to assist new missionaries in becoming successful missionaries for God’s glory.

“To Preach Christ” January 2023 A sold-out life surrendered to the life and longings of Christ can and does accomplish much for the Kingdom of God! Robert Moffett served as a church planting missionary for 49 years in South Africa (1816-1865). He learned the Tswana (SWA-nuh) language and ministered extensively among many communities as well […]