The Chime(s) that Change the World 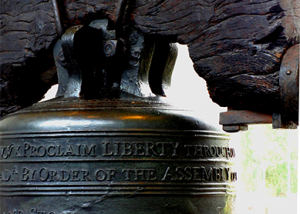 The Bell had been ordered and installed to commemorate the 50-year anniversary of Pennsylvania’s founder’s, William Penn, 1701 Charter of Privileges, the State’s original Constitution.  Penn in the Charter speaks of freedom as a God-given value for all people.  Aptly engraved on the bell, then, is Leviticus 25:10 which reads: “Proclaim Liberty throughout all the land unto all the inhabitants thereof.”

In like fashion to our Liberty Bell ringing out the sound of freedom for all, our missionaries have been fashioned by God to herald forth the message of God’s dear Son…that He has come to deliver captives from the power of darkness and to translate them into His kingdom.” (Col.1:13) At times, they set their beautiful feet upon the mountain to declare it with might and power.  Most often, they share it individually in the mud and grass huts of those broken under the weight of oppressive circumstances and sinful consequences.  Regardless of loudness or location, the timeless value of spiritual liberty in Christ and the honor it is for those who proclaim it is unchanging.  May we continue to support them with our interest and investment of prayer as we trust God to fashion more ‘Bells of Liberty’ to be sent forth proclaiming that same liberty in the harsh and hellish dens of dark oppression at world’s end.  We trust that both the chiming of the Gospel in the ears of the lost, and, that of our prayers in the ears of our Lord, will indeed be chimes that change the world for which God so lovingly gave His only begotten Son!

Thank you for your commitment to pray!

June 2020 The Chime(s) that Change the World “Tradition tells of a chime that changed the world on July 8, 1776, with the Liberty Bell ringing out from the tower of Independence Hall summoning the citizens of Philadelphia to hear the first public reading of the Declaration of Independence by Colonel John Nixon.” (The […]