In my attempt to jest with people, sometimes I cross a line into what some would consider to be abrasive or even offensive—both being unintentional.  I try too hard at times to ‘fit in’ around people with whom I already have a hard time connecting and so my lack of tact strains the relationship.  My desire to belong mixed with insecure feelings of not belonging is a complicated emotion which fits with many who have stepped out of the United Stated into an alternate life of extended full-time missionary service.  Our re-entry and acclimation to our home society is strained going both directions.  The world continued to turn as we ‘turn’ in a different world.  The potential of straining relationships often brings a desire to not want to communicate as a means to solving the problem…and when attempts are made, they are tense. 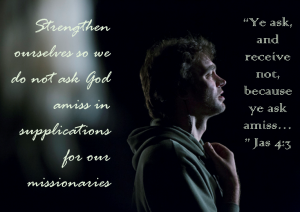 We, as believers who commune with God, cannot be so disinclined to communicate with Him on behalf of our missionaries.  That spiritual soldier who has quite literally laid down his life as well as the life of his wife and children for Christ’s sake and the gospel, cannot have provisionary lines of care broken because of our complicated emotions.  James 4:2,3 says “…ye fight and war, yet ye have not, because ye ask not. Ye ask, and receive not, because ye ask amiss… ”  How can we strengthen ourselves so we do not ask God amiss in supplications for our missionaries?

I suggest continuing to read in James 4:7-9, as it is clear in its instruction on how to pray in a way which provokes God to action and invokes His grace for provision.  1.) Fend ourselves behind His ramparts of protection (run to God), 2.) fight off the enemy by combating their inventions (resist the devil),  and 3.) fortify our hearts and minds from selfish distractions  (repent from sin).

As we strengthen ourselves in the inner man, we help sustain missionaries by strengthening the supply lines of prayer in battle as they fight and war against spiritual forces of evil who fortify their positions in the evil hearts of unsaved men!   Thank you for praying.

Activity or Vitality April, 2021 “The Salt Life” is a cultural catch phrase which describes the lifestyle of enthusiasts who center their life’s interest and activities around the ocean.  It is no duty for them to perform, but a desire to fulfill—and they do!  From beach dwellers to ocean divers—they live out “The Salt Life!” […]