Paul and Silas had been treated unlawfully and unethically as they were beaten and thrown into prison in Philippi.  Their feet were fastened in stocks, yet their faith was free to exercise in prayer and song.  Though this great injustice was brought about by overreactive and angry men in power, God had a greater good which He had chosen to accomplish through the ‘good 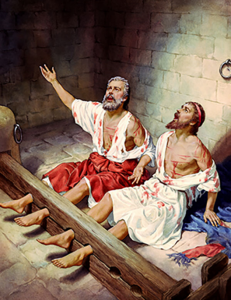 works’ of His choice servants.  Because they were suffering willingly and properly for Christ’s sake, not only would they see the conversion of the Philippian jailor and his family, who would likely die having set at liberty the prisoners under his watch care, but the probable conversion of the fellow jailed as well. Acts 16:25 says: “And at midnight Paul and Silas prayed, and sang praises unto God: and the prisoners heard them.”

Our posture of humble prayer and heavenly peace as we serve and suffer for righteousness’ sake—for Christ’ sake—is often visible to those who are self-filled and sin soaked. This type of testimony, when set on a candlestick, gives light unto all the lost who are “in the house.” (Mt. 5:10-16) I encourage you to not only serve when suffering comes, but to rejoice and sing knowing that God’s greater good will indeed be accomplished much through your good works so that others may glorify God which is in heaven!

Our missionaries serving throughout the world are taking this posture as they are often treated unlawfully and unethically within the countries where they live and labor.  They need our prayers.  Pray for God’s power to be made perfect in their weakness; and that God’s purpose would be manifested prominently in His strength.

We thank you for your prayers!

As Fools Rushing In October 2021 Mrs. O’Leary’s cow kicked over a lantern in her barn on DeKoven Street in Chicago on October 8, 1871. Not only did her family lose her barn to the flames, but more than 300 people were killed and 90,000 were left homeless as “The Great Chicago Fire” leveled 3.5 […]